(Continuing with our 7 of the greatest Nurses in American History, check the part 6 here: https://www.pulseuniform.com/coffee-time/7-greatest-nurses-in-american-history-margaret-sanger/) 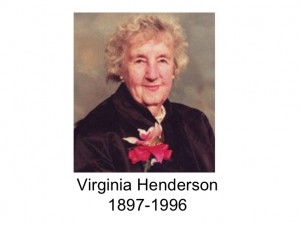 Virginia Henderson was born in Kansas City, Missouri in 1897, the fifth of the eight children of Lucy Minor Abbot and Daniel B. Henderson. She was named after the State her mother longed for. At age four, she returned to Virginia and began her schooling at Bellevue, a preparatory school owned by her grandfather William Richardson Abbot.

Her father was a former teacher at Bellevue and was an attorney representing the Native American Indians in disputes with the U.S. Government, winning a major case for the Klamath tribe in 1937.

Henderson received her early education at home in Virginia with her aunts, and uncle Charles Abbot, at his school for boys in the community Army School of Nursing at Walter Reed Hospital in Washington D.C.

In 1921, she received her Diploma in Nursing from the Army School of Nursing at Walter Reed Hospital, Washington D.C.

In 1923, she started teaching nursing at the Norfolk Protestant Hospital in Virginia. In 1929, she entered Teachers College at Columbia University for her Bachelor's Degree in 1932, and took her Master's Degree in 1934.

In 1921 after receiving her Diploma, Henderson worked at the Henry Street Visiting Nurse Service for two years after graduation. She initially planned to switched professions after two years, but her strong desire to help the profession averted her plan. Throughout the years, she helped remedy the view of nurses in part through exhaustive research that helped establish the scholarly underpinnings of her professions.

From 1924 to 1929, she worked as an instructor and educational director in Norfolk Protestant Hospital, Norfolk, Virginia. The following year, in 1930, she was a nurse supervisor and clinical instructor at the outpatient department of Strong Memorial Hospital, Rochester, New York.

From 1934 to 1948, 14 years of her career, she worked as an instructor and associate professor at Teachers College, Columbia University in New York.